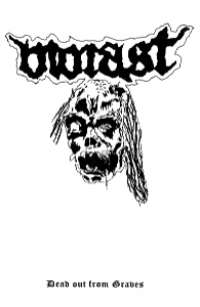 If PENTAGRAM and BEHERIT had rehearsed together, the outcome would have been pretty similar to MORAST’s 2012 Demo „Dead out from Graves“. And the songs delivered by MORAST, a band from the Grand Duchy of Luxembourg which has been active since 1994, are seriously awesome: Lasting for about 40 minutes, rumbling tracks are spread which sound like a bonebreaking steamroller with their grooving doomy uptempo. They just leave no time to breathe.

In addition, the aggressive vocals flood the ear canal and create a damn ancient sounding piece of pain. Fans of the mentioned PENTAGRAM and BEHERIT, but also of early SODOM, HELLHAMMER/CELTIC FROST and BATHORY should take a listen. „Dead out from Graves“ is a mature yet not polished recording, brought to you by Dunkelheit Produktionen in a limited amount of 200 pro-tapes.