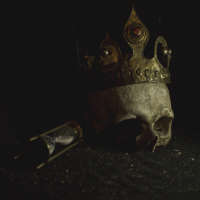 Re-issue of Finnish funeral doom Profetus's 1st album "Coronation of the Black Sun"(2009) and 1st demo "Saturnine"(2007), including 2015 live as bonus. All tracks are remastered by Dan Lowndes from Resonance Sound Studio. Slow drumming guide you to the realm of the children of Saturn, sorrowful melodies combined with crushing power chords bring gloomy atmosphere, and the growling poet will lead you to the hall of coronation! The doomed codex are now dug up from the tomb in the bleak lakeside and see the light of the day again!