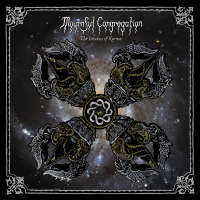 Since they started their activities in 1993, Australian extreme doom band Mournful Congregation have released many iconic albums in the genre. About 6 years after they released previous album "The Book of Kings", they unleash 5th album with new drummer Tim Call(ex-Aldebaran) who played on 2014 EP "Concrescence of the Sophia" and have played in a lot of shows. The layered harmonies are much richer than ever. The rhythm is extremely slow but it's also dynamic. And half growling/half whispering vocal tell mournful tales of doom. Dive into 80 minutes of gloomy nightmare crafted by Aussie doom giants! The Incubus of Karma is upon you...